Portland Timbers Could Already Have Qualified for CONCACAF Champions League 2014

A pending vote from CONCACAF could see the Timbers in the Champions League regardless of this weekend's result.

Share All sharing options for: Portland Timbers Could Already Have Qualified for CONCACAF Champions League 2014

Since joining Major League Soccer in 2011 the Portland Timbers have been aiming for a spot in the CONCACAF Champions League. Now the Timbers are one three goal win away from that goal.

Or are they already there?

According to a report from Simon Borg on MLSsoccer.com, the CONCACAF executive committee will vote on December 13th to approve a proposal put forward back in January. The proposal would remove the Champions League berth from the MLS Cup runner-up and give it to the winner of the opposite conference from the Supporters' Shield winner; in this case the spot would go to the Timbers. 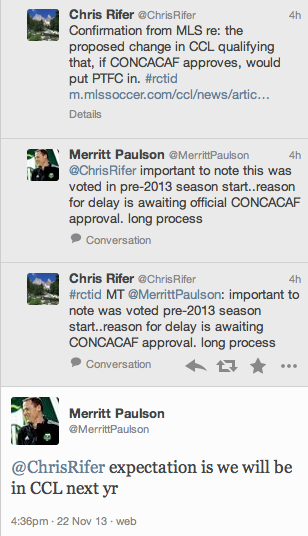 Paulson has since deleted the tweets (surprise!), but his bullishness on the prospect certainly makes it seem likely that the proposal will be approved. In another deleted tweet Paulson described the process as "MLS submits...CONCACAF either approves change or doesn't. typically former."

Qualification for the Champions League could bring both positives and negatives for the Timbers. Although the added fixture congestion can prove challenging to MLS teams with limited rosters, the influx of allocation money from qualifying can be an important boon, allowing teams to spend much more than their competition both on transfers and in increasing their salary cap.

Forget for a second that the Timbers can still qualify for the Champions League the old fashioned way, by winning the MLS Cup. How would you feel if the Timbers got into CONCACAF through this ruling, despite it being a known possibility in MLS all year (for the owners at least)?