Which Formation Will the Portland Timbers Use in 2013?

Caleb Porter has stressed his desire for a possession based system and in order to do that he needs a formation suited to keeping possession.

Share All sharing options for: Which Formation Will the Portland Timbers Use in 2013?

One of Caleb Porter's goals for the preseason was to see what formation best suited the players he felt were his starters. So far we have seen the 4-4-2 diamond and the 4-2-3-1 used in the first two games of the preseason and we may yet see the 4-3-3, it may even be used for today's game. Porter's goal is to play possession football because the better you keep the ball the less you have to defend, which should then theoretically keep the ball out of your own net.

The 4-4-2 formation is probably the most prevalent formation in MLS but can be used in a variety of ways. Even the 4-4-2 Diamond has two different variations between the narrow and the wide diamond formations. Narrow and wide just refer to where the left and right midfielders are positioned compared to the sidelines. The wide formation was one commonly used by John Spencer when he played Darlington Nagbe as a central midfielder in front of Jack Jewsbury or Diego Chara but behind the two forwards and the wings as wide as possible. 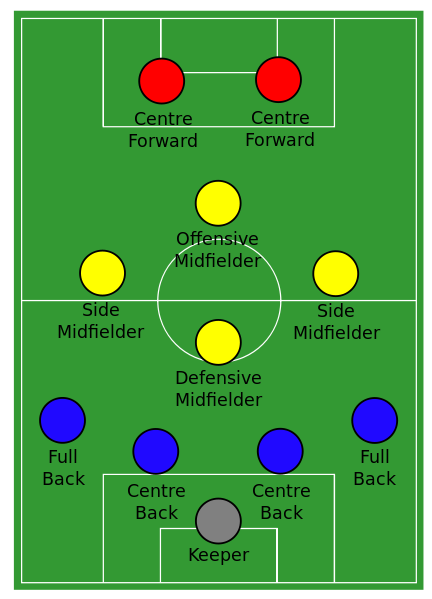 Judging by the line-up utilized in the first preseason game Porter uses the narrow variant. The advantage of the narrow 4-4-2 Diamond formation is that offensively it allows for possession through the middle of the pitch because of the numbers advantage usually found when playing formations with only 2 central midfielders. In the game against Colorado this formation was used with Diego Chara and Will Johnson as the side midfielders, Jack Jewsbury, later Eric Alexander, as the defensive midfielder and Diego Valeri as the attacking midfielder.

The reason Will and Diego are deployed as the side midfielders is because of the need for quick defensive shifts once the ball is turned over. When the opposition gets the ball they will see space on the wings and usually the ball will end up there rather than played through the congested center of the pitch. This means the two side midfielders need to close down the space quickly and efficiently to help the fullbacks. When this happens the whole midfield shifts towards the ball and continues to deny any space in the center of the pitch.

Once the ball is won by the Timbers they will play through the center of the pitch and more than likely through Diego Valeri. Valeri will need to be the trequartista, someone who can find space and unlock the defense with one pass or keep possession. With 2 strikers in front of him and 3 midfielders close to him he should have a lot of options to probe or keep possession as he sees fit.

The disadvantage of this formation is the space on the wings and if the opposition has quick wings and fullbacks they can exploit it. If the side midfielders can not quickly pinch to the side with the ball this leaves the fullbacks going 2 v 1 and thus stretching Portland's defense and creating holes which can be exploited.

This formation has been slowly taking over competitive football for the last 20 years and is currently the predominant football found in Spain and other top leagues. Portland used this formation in the Sporting Kansas City preseason game with Chara and Will Johnson playing the DM positions, Valeria at the ACM, and Sal Zizzo and Darlington Nagbe at the outside midfield positions. 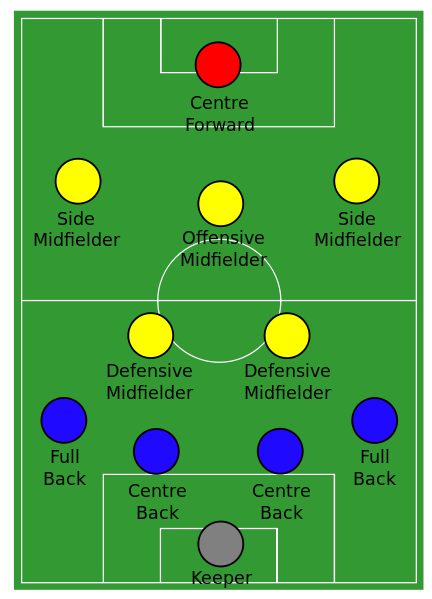 As many teams play a 4-4-2 variant this formation can be used to great affect in countering the strengths of the traditional 4-4-2.

Glancing at the midfield and seeing 5 players there might lead one to believe this is a more defensive formation. However this is not entirely correct as the attacking midfielder is usually freed from all defensive responsibility. By freeing someone like Valeri of defensive responsibilities this allows him to be get in a position to receive the ball once it is won back by the Timbers and thus allowing Portland to either attack quickly or maintain possession. This is especially effective against teams that play a flat 4-4-2 or do not run a DMC because Valeri would be able to roam free without a mark while Portland is on defense.

The lone forward needs to be a tireless worker who covers a lot of ground in order to keep the offense flowing. If the forward is starved of service or does not make the runs needed the offense can grind to a halt very quickly.

Some would call this the ultimate attacking formation but is also one of the hardest formations to pull off. In a 4-3-3 even when on the attack every player must be thinking about positioning themselves defensively if and when the ball gets lost, because if you lose the ball you are very susceptible to counters. However, if the team is ready for the loss of the ball the defensive pressure they can bring to bear on the ball quickly can lead to a quick turnover and then into the attack against an out manned defense.

In order to play the 4-3-3 correctly a team will need a lot of good and technically skilled players and judging by the first two games and the way the players played I would venture to guess this formation will not be used often, if at all this year.

There are the 3 possible formations Portland may utilize this year. Which do you want to see? Which better fits Portland's current roster?