David Horst's Path to Recovery is Long but Straight

Despite a career beset by injuries David Horst has come back before and he likely will again. In the mean time though, the Timbers will miss his presence on the pitch.

Share All sharing options for: David Horst's Path to Recovery is Long but Straight

I called him prior to the surgery and gave him a bit of a pep talk. He is a fighter. He wants to be on the field. He loves this club. He fought hard to get healthy, to play, and thirteen minutes and he is out again.

What I told him was, "just keep doing what you do. You're good because you're a fighter and you've made it, really, to this level because of that. This is just another little thing you have got to get through."

And he will. I told him it just makes you hungrier and it makes it sweeter when you get back and you get healthy again.

-Caleb Porter on what he told David Horst after his injury.

Porter is right about Horst. Say what you will about certain aspects of his game, Horst plays at the top level of American soccer through his willingness to fight. More than that, Horst is one of those players who plays the game with an infectious enthusiasm. Few players in Timbers history have gone quite so berserk after scoring against our archrival. That enthusiasm is there every day -- his love for the game is plastered on his face after every game and during every practice, and his teammates respond in kind.

That earnest enthusiasm is apparent in his interactions with us in the press as well. Last week after he earned the Timbers' first penalty in over a year, I talked to Horst about what happened leading up to the call. He chuckled as he told me about it.

Every corner in the MLS is pretty much a Royal Rumble, to say the least, and usually there are not too many fouls called for the attacking team on corners. It has taken me six years to finally get a foul for me on a corner. Diego played a great ball in there and Atiba Harris, he just got unlucky this time and the ref saw it. There wasn't too many players around us, so he couldn't get away with holding on to me.

The penalty call came in Horst's first game since a preseason groin strain derailed what was supposed to be his return from off season hip surgery, a repeat of the surgery that kept him off the pitch for nine games at the start of the 2012 season. 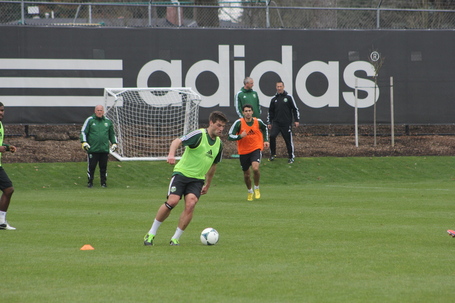 Horst during his second full week of practice since returning from a groin strain. 3/26

This latest injury is not an easy one to return from. In their press release the Timbers list an estimated return time of six months for Horst, a time frame that puts him back just as the season is over. That time frame is roughly the same as was given for Brent Richards and Bright Dike after their recent ligament repair surgeries.

The return from a displaced tibial plateau fracture (DTPF), however, is very different from the return from a ligament tear. The good news is that his bone will likely heal more quickly and more permanently than ligaments tend to. The bad news is that Horst will be unable to put weight on his leg while the bone heals, which will lengthen the recovery time as he builds back muscle and regains the range of motion in his joint.

In high school I suffered a DTPF of my own while playing lacrosse. The recovery process may be similar to what Horst will go through, or it may diverge wildly, as I was not a professional athlete and mine occurred a decade ago. The most enduring memory of the whole thing was the hours spend strapped into a machine designed to gradually increase the knee's flexibility. (One of these. Find out more about the treatment here.)

I got lucky (as lucky as a guy with a chunk of bone broken off in the middle of his knee can be, at least) and avoided completely shredding the cartilage in my knee with that broken-off bit. Whether Horst survives with his meniscus intact remains to be seen.

But I have little doubt that he'll be back.

David Horst will want nothing to do with whatever eulogies people are giving for his knee and his career, because nothing could be further from the truth. Horst is a fighter, and despite all the hurdles that come with this type of injury, it is one that has a straightforward recovery path. It is not easy, and it is not fun, but for a player like Horst who has built his career on being a battler, a scrapper, a fighter, it is almost a certainty.