Is Michael Harrington the Timbers' most underrated player?

Michael Harrington is having an effective season at left back, yet his name is rarely mentioned in discussions of changes that have made the Timbers playoff contenders.

Share All sharing options for: Is Michael Harrington the Timbers' most underrated player?

With Geoff stepping down we have brought in some reinforcements to help keep up the standard we have set. In the wake of his article last week on Jack Jewsbury, Michael Orr will be joining us as a regular contributor and bringing you a weekly dose of opinion on the state of soccer here in Portland. -Will

Quick, which Timbers defender has played the most MLS games this season? If you said Jack Jewsbury or Andrew Jean-Bapitste, you were wrong. The answer is Michael Harrington, who has quietly become among the most dependable players in Portland.

While eight other players have been named to at least one MLS Team of the Week, Harrington has yet to be nominated. Nine different players have scored for the Timbers in league play, though Harrington has neither scored himself nor assisted on any of the team's thirty-one goals. Yet each week he's there, just to the left of whichever central defender's turn is next on the seemingly endless carousel.

Last week we looked at Jack Jewsbury's relative decline as the 2013 season has progressed. To be fair to Jack, part of what makes him look worse is comparing his play to that of Harrington. Part of what held Harrington back early in the season was his pairing with Ryan Miller. That's no knock on Miller, it just means that Caleb Porter realized in the first few games that the Harrington/Miller combination was not going to work.

Why is Jewsbury a better partner for Harrington, then? Most of it has to do with Porter's seesaw plan where when one outside back pushes forward to either press defensively or aid in attack, the opposite defender drops back and allows the center backs to slide slightly to create what is in essence a three-man back line. When Harrington bombs forward, Jewsbury drops back, and vice versa. Except Jewsbury has been required to stay further back more often, either by request from Porter, to allow Harrington to better take part in the offense, or by necessity as Jewsbury is not fast enough to cover ground from a more advanced position.

Miller got too far forward, too often, when paired with Harrington. That left the center back stranded and multiple goals allowed against Red Bull New York and Montreal Impact back in March. Porter was faced with a decision on which of the two outside backs was causing the set-up to break down and when Jewsbury returned from injury, Porter chose Miller to sit and gave Harrington a chance to fully claim the left back position.

Regardless, the seesaw has been pretty one-sided since April, increasingly putting the onus on Jewsbury and allowing Harrington to flourish with less defensive responsibility. Only occasionally does Porter recall Harrington in a semi-permanent way, such as in the LA Galaxy game at Jeld-Wen Field in July. After Hector Jimenez torched Harrington for twenty minutes, Porter pushed his left back deeper and did not permit as many offensive forays. The result was Jimenez mostly disappearing from the game while the Timbers came back to win in dramatic fashion.

Last weekend, Harrington had a strong performance at in San Jose while Jewsbury was less effective. Harrington completed 74.5% of his 55 passes and was particularly influential in the game's final minutes. Here are Harrington's key passes after San Jose's second goal. Bearing in mind, of course, that the Timbers had to chase the game at that point and were always more likely to send players forward: 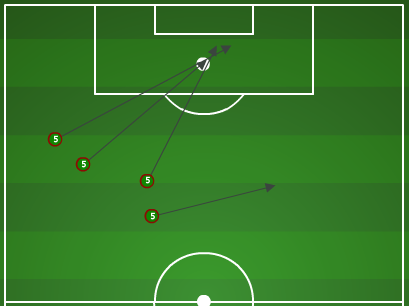 Compare that to all of Jewsbury's passes during the same period: 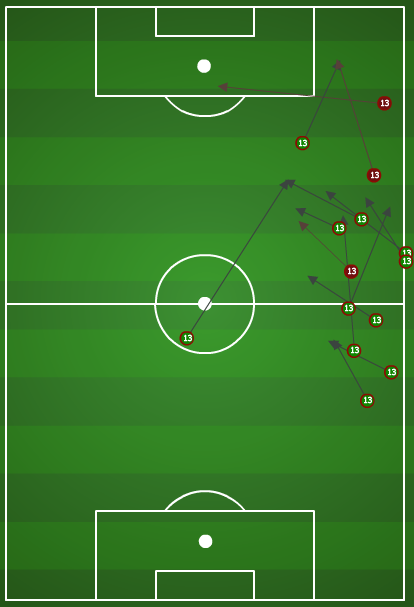 Jewbury is not asked to be as offensively active as Harrington, so it makes sense that his passing sequence, even when trailing late in a game, would not offer quite as many high percentage chances. Yet even this apples-and-oranges comparison points out just how involved Harrington was, and can be when called upon.

What has also helped Harrington this season has been the high level of play from Rodney Wallace on the left side. Unlike Jewsbury, who is burdened with players on his side who are not particularly interested in defending, at least not below midfield, Harrington has a former left back ahead of him. Wallace's improvement in all aspects of the game, though not necessarily in San Jose over the weekend, has given Harrington freedom Jewsbury simply has not enjoyed.

Harrington's crosses to Ryan Johnson and Frédéric Piquionne were brilliant balls that could have, and maybe should have resulted in goals. With Wallace occupying wide defenders, Harrington could step inward and use his favored right foot to drop perfect crosses in to Portland's center forwards. That they did not result in goals is not Harrington's fault, and he would've found himself on the score sheet for the first time this season. That ability, from the run of play, mostly evades Jewsbury. Again, it's why Porter has chosen Jewsbury to be the anvil that launches Harrington off the seesaw and into the final third.

While Will Johnson and Valeri deserve their billing as the most significant offseason acquisitions, Harrington continues to drift below the laudatory glance of fans and pundits alike. Yet when the Timbers are at their best, it includes a strong performance by their left back. Beyond what I said last week, we should be paying more attention to what Harrington is doing well than where Jewsbury is struggling. In the long run, it may just be that Harrington's strengths outweigh Jewbury's weaknesses and provide the Timbers with kind of outside back performance that has been so lacking in their short MLS existence.