The Timbers' midfielder has carved out a position as one of the most important players as the season enters its most demanding phase.

With all the changes to the Portland Timbers' roster between 2012 and 2013, it's easy to overlook Ben Zemanski. He's started just seven times this year and rarely finds his way into highlight packages. Yet anyone watching Saturday's 2-1 defeat of FC Dallas could see Zemanski's value, even as a part-time starter.

When Caleb Porter traded for Zemanski back in February, the move was generally seen as the new Timbers manager trying to add some of his former Akron players to the Timbers as a means of creating familiarity within his system. At that point, both Michael Nanchoff and David Meves were training with the club and bringing in Zemanski, a regular starter at Chivas USA but hardly a star, seemed like a similar acquisition. Porter gave fairly generic praise in the announcement, saying:

"We're pleased to add a player of Ben's caliber, as he has proven to be an impact player in this league and fits the ethos of our club. He brings an additional competitive presence that we are confident will help advance the culture of this club even further."

Competitiveness is a common trait among professional athletes, so it took until the season started before we could see why Porter wanted to bring in Zemanski, beyond simply his Akron relationship. Like Jack Jewsbury and Michael Harrington, Zemanski's greatest trait is his flexibility. Most often this has manifested in substitute appearances, coming on in second halves as Porter adjusts his plans to reflect the Timbers' need to score or defend a lead late in a game.

Early in the season, when Porter was still trying to figure out exactly which formation his team could best employ, Zemanski started twice at right back. It's hard to remember a time when the Timbers didn't line up in some form of the familiar 4-2-3-1 but in both of the team's first two away games, Porter employed a 4-4-2 diamond. In draws against Seattle Sounders and Colorado Rapids, Jewsbury was the base of the diamond and Zemanski the right back used to get forward and occupy the wide midfielders and fullbacks.

While Zemanski was certainly fine in that role, particularly against Colorado's narrow set-up, Porter learned that Zemanski could be better employed in central midfield. Especially after Ryan Miller returned from the reserves and Alvas Powell signed. In four of his last five starts, Zemanski has been paired with Diego Chara, starts that have coincided with home victories over LA Galaxy and FC Dallas and an away draw against Chicago Fire. Zemanski also played alongside Chara in Portland's loss to Columbus Crew and had his sole pairing with Will Johnson in the Timbers' 2-1 loss at San Jose Earthquakes in late July.

Though his starts have been fairly spread out since his midfield role has solidified in early June, it's become clear that Zemanski is almost the perfect partner for Chara. Will Johnson is obviously having a fantastic season, but as his scapula injury makes his current absence an indefinite one, and Jewsbury remains hobbled with a lingering ankle injury, the 25-year-old Ohio native will continue to be called upon. Porter clearly likes Powell at right back, particularly at home, which leaves Chara's partner open for Zemanski for the foreseeable future.

So why is Zemanski such a nice partner for Chara? Apart from his brilliant goal against Chicago and his perfectly placed cross for Ryan Johnson's goal against Montreal, Zemanski is usually content to play a mostly defensive role. When Chara is paired with Will Johnson, there is a constant exchange of which central midfielder is attacking and which is defending. When Zemanski is Chara's partner, the Colombian has almost free reign to roam wherever he likes. While this is certainly possible alongside Johnson, for example remember Chara's game against Houston Dynamo, it's far more likely to be shared than it is with Zemanski.

When Chara roams, he is at his best. It's not that there's no direction, just that he's freed of the explicit defending responsibilities that come when Johnson bombs forward. A 'box-to-box' midfielder is an overused cliche but it comes much closer to describing what Chara becomes when paired with the mostly defensive-minded Zemanski. And to be clear, being more defensive-minded does not necessarily mean set deeper.

Compare the locations of Zemanski's defensive successes against Dallas on Saturday: 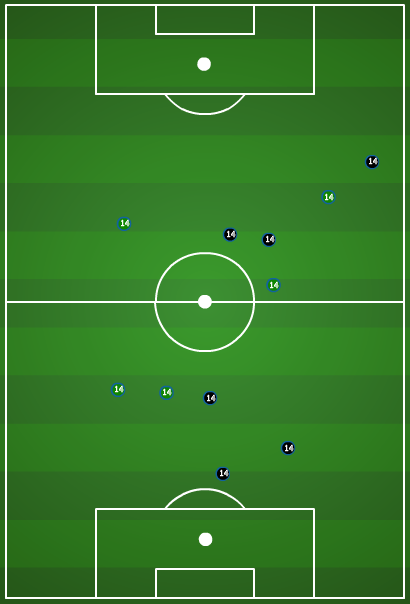 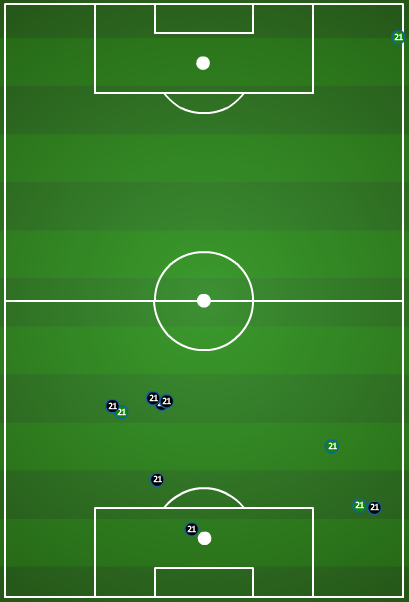 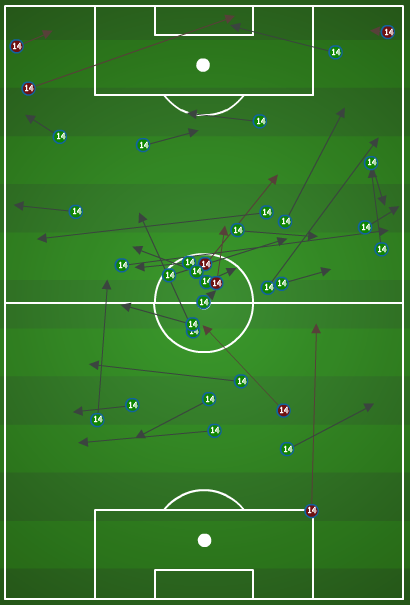 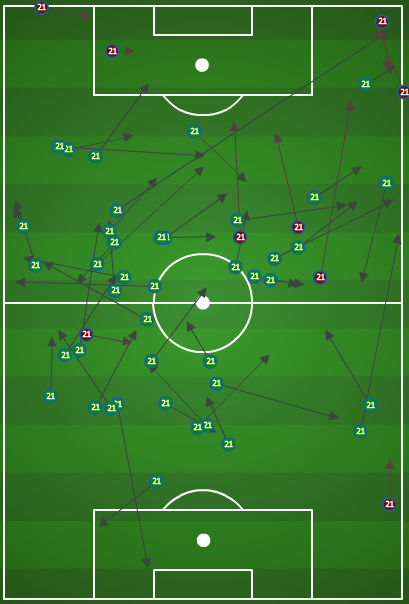 Chara is much more involved offensively, particularly with Diego Valeri and Darlington Nagbe in the middle of the field, while Zemanski is more of a safety valve when the Timbers hold possession. His passes are much more likely to be swinging the ball from one side to the other whereas Chara gets the ball to dangerous players when freed to move about the field.

The point here is that Zemanski has become an extremely useful player for this Timbers team, despite being among the least heralded arrivals in the offseason. He allows Chara to do what he does best without reducing the Timbers' overall ability to defend. When he does get forward, Zemanski has a great first touch and just as importantly, a keen sense of when it is or isn't appropriate to join the attack.

With injuries and suspensions looming at a very difficult stretch of the season, the Timbers have more than adequate cover in central midfield when Zemanski is in the game. Porter has stressed the importance of depth all season and now his rotation of players earlier in the season is paying off as Zemanski is just as comfortable in the Timbers team as any of the regular starters.

"I thought Ben had a great game. He got around the park and won a lot of balls. He covers a lot of ground; he's one of our most fit players and he broke up a ton of plays and even got forward at times. It's great to have a kind of third guy to put in when we lose Chara or Johnson.

"I didn't think we missed much of a beat. Obviously we always miss Will because he is such a leader and he is one of the best players in the league, but I thought Ben did an admirable job and he is going to continue to need to step in. Will is day by day, so he could be available, but if he is not then we know that we have Zemanski to step in."