Share All sharing options for: The So-Called Fernandez/Valeri Conundrum

When Gaston Fernandez signed with the Portland Timbers, the immediate response was the expectation that he would be the starting striker on March 8 against the Philadelphia Union. After all, the 30-year-old Argentine has a pretty good record of scoring goals in the top flights of Mexico and Argentina. His inclusion into the starting group was easily explained by simply removing Ryan Johnson from the 2013 line up and keeping almost everything else in the attacking third the same.

Well, what about now? To be fair, only three preseason games have taken place and Fernandez has played no more than an hour in any single encounter so far. Yet what seems almost immediately obvious is that La Gata might be better utilized in the 'Valeri role' rather than up top as an out-and-out striker, especially given the strong play of Maximiliano Urruti. The preseason has been interesting because it has not included Diego Valeri, Steve Zakuani or Rodney Wallace, so preconceived notions regarding positioning have been discarded, at least in the short-term. To say nothing of Caleb Porter's general aversion to labeling players with a single position or role.

Much of Fernandez's time in Tucson has come as the middle player in Porter's three-man attacking line just beneath Urruti. Occupying that area of the field might be best identified in this screen shot from early in the build up to Will Johnson's goal against Houston Dynamo last week: 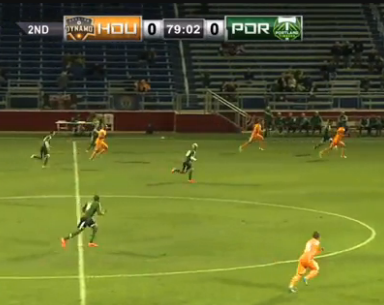 Urruti has the ball, challenging Eric Brunner, while a clear line of Schillo Tshuma, Fernandez and Darlington Nagbe spread across the field in the next band. Johnson is already bombing forward on a run that ultimately led him into the box and on the receiving end of Urruti's laid off pass. Where you see Fernandez above is exactly where Valeri would be found, and presumably will be upon his return from rehabilitation.

Yet as we know, Porter's system allows for movement between areas of the field, eschewing set positions and giving attacking players flexibility to take advantage of spaces. Here's a slightly different look (from an admittedly different angle) in the build up to Nagbe's shot early in the game against Seattle Sounders over the weekend: 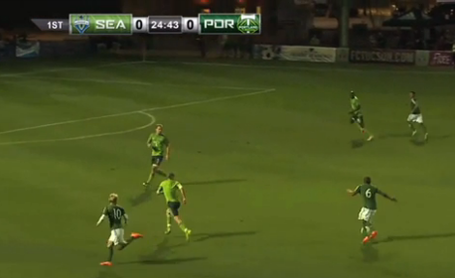 In this sequence, Nagbe picked up the ball on the left and darted inward as soon as he saw the gaping hole in front of Chad Marshall. Fernandez immediately recognized the move and jumped out to fill Nagbe's departure from the left. Kalif Alhassan is out of the picture by this point but was playing the wide right position. Urruti angled his initial run away from the space into which Nagbe moved before eventually cutting back toward the middle. The point of this shot is simply to show how Porter's system allows his players to make decisions in the moment, which includes Fernandez in a wide area.

Going quickly back to the Houston game, it's also clear how wide players can skip forward and almost play as a second forward, depending on the player. Nagbe is much more likely to do so, as is Valeri. Though it is not present in this particular image, it's fair to suggest that Fernandez would be perfectly comfortable joining Urruti ahead of the other attackers, within the flow of the game. But for now, here's Fernandez in the Valeri role with Urruti and Nagbe as options ahead: 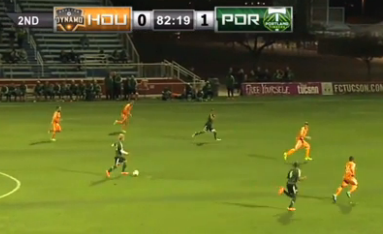 Clearly the open pass there was from Fernandez to Urruti, and it of course resulted in Portland's second goal against the Dynamo. But imagine a similar screen grab with Valeri on the ball, Urruti awaiting a pass and Fernandez in Nagbe's position. Not so hard to picture, is it?

So what exactly is the point of this post? Simply that there need not be a conundrum regarding what will happen when Valeri returns from injury. The likeliest scenario, despite his slow return to health and fitness, is that Zakuani is not going to be available by March 8. Though Tshuma showed well in Tucson, and Alhassan is a perfectly reasonable option at any of the three attacking spots beneath the striker, there is little reason to expect that Fernandez and Valeri will not be on the field at the same time, alongside Nagbe and Urruti.

At this point, given the health, experience and consistency of other options, those four players are the best case scenario for Porter as the season draws near. Asking where exactly they will play is not an unreasonable question, but it has to come with the understanding that the very reason Porter has targeted the players he has is their abilities to produce from various points on the field.

Indeed, our own Stacey Neve hinted at this in her breakdown of Fernandez's earliest offerings, saying, "It looks like however the line up shakes out, the Timbers' front four may be given a lot of freedom to roam, which might be a viable solution to having players whose roles overlap."

In my opinion, that set up isn't so much a solution to a problem but an ideal from Porter's perspective. Any of those four players can reasonably expect to occupy any or all of the areas of the field during a given match, which not only limits a defense's ability to predict what will happen next but allows for the maximizing of the talents of all of the pieces. In other words, a whole that is more than just the sum of its parts.

With one more preseason game in Tucson coming today and three more in at Providence Park before the March 8 First Kick, Porter will get to try these players in a few more combinations and hopefully with Valeri as a part of the squad. While the Philadelphia game is circled on all of our calendars, and is certainly important for the Timbers, it's also only the first step in the greater whole for which Porter will be scheming. As we saw last season, Porter was able to give players a look at various positions and in different roles throughout the earlier parts of the season so that when it came time to win games down the stretch, he could pick exactly the players he wanted for specific opponents.

Expect that to be the case again this year, though with players who can even more completely weave in and out of different spaces to create a nightmare for opposing defenders. While my opinion is that Fernandez will ultimately occupy a wide starting point with Urruti ahead of him, at least in March, it's just as likely that Urruti could end up in that attacking band and Fernandez could start up top. Either way, Porter will yet not be forced to make the even more difficult questions that will come when Zakuani and Wallace are healthy.