The former Timbers striker is suing the club for personal injury after his three concussions between 2011 and 2012.

Former Portland Timbers striker Eddie Johnson has filed suit against the club's parent company, Peregrine Sports, alleging the team and affiliated doctors and training staff allowed him to practice while still suffering the effects of a concussion. Johnson, who retired from professional soccer in April 2012 after three concussions in eight months, is seeking $9.9 million in a personal injury suit filed Wednesday at the Multnomah County Circuit Court. Both The Oregonian and Willamette Week have reported on the lawsuit this afternoon.

According to Willamette Week, the suit contends:

"Eddie Johnson did not have a proper evaluation done regarding his previous season-ending concussion or head injury before being permitted to fully return to play to participate in pre-season professional soccer activities.

"The negligence...was a substantial factor in causing Plaintiff Eddie Johnson to sustain serious and permanent traumatic head and brain injuries, with headaches, memory impairment, cognitive deficits, photophobia, sleep difficulties and fatigue, anxiety and depression. Also as a result of the described injuries, Plaintiff Eddie Johnson has and will continue to suffer loss of function and ability, pain, discomfort, mental suffering, anxiety and inconvenience and interference with his normal and usual activities."

In reply, the Timbers have released a statement saying:

"While we cannot comment publicly on any specific active legal proceeding, we can definitively state that the Portland Timbers follow all MLS player health-related protocol and have done so since we joined the league. Additionally, we approach head injuries with extra caution and err on the side of conservatism above and beyond the official protocol when dealing with them. We have an expert staff of physicians and trainers and we stand by them and their evaluations."

Johnson only featured in seven games with the Timbers between 2011 and 2012, thanks not only to his head injuries but also a nagging achilles injury in his first year with Portland. He scored his lone competitive goal with the team in a 2-2 draw with Toronto FC on July 30, 2011 at Jeld-Wen Field. He also scored in a 3-2 friendly loss against West Bromwich Albion in Portland on July 20 of the same year. 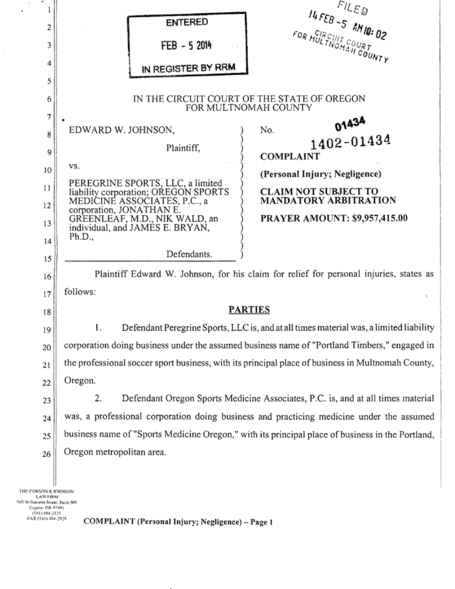