We take a quick look at this year's Timbers salaries.

Share All sharing options for: 2014 MLS Salaries Released by Players Association; Here are the Portland Timbers

As happens each year around this time, the MLS Players Association has released this year's Salaries into the wild. This will be accompanied by qualifications from all corners, saying that these numbers do not tell the whole story, but they are what we have got so let's take a look.

A quick look at the run down reveals that Diego Valeri is once again the team's highest paid player, making $500,000 this year, with captain Will Johnson following him with $325,000 this year from his newly signed contract.

On the low end of the totem pole are all of this year's rookie, save Schillo Tshuma, who are making around $36,500 for the season. Tshuma, who is on a Generation Adidas contract, is making $113,000.

The big question marks on the pay scale this year have been the team's new additions, particularly the Argentinians. Gastón Fernández is making the most of the South American pair at $150,000, while Norberto Paparatto is making $100,000. Steve Zakuani is making $120,000 after the Timbers picked him up in the re-entry draft this year. 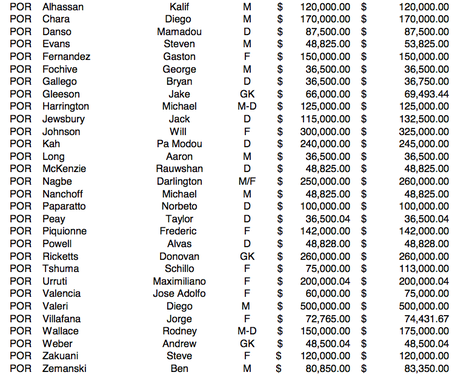 You can find a PDF with the full list of salaries for the league here.