Continuing the Evolution; Is Alvas Powell Growing into his Spot at Right Back for the Portland Timbers?

Alvas Powell has started two games in a row at right back, and while there's plenty of potential in the young Jamaican international, it remains to be seen if he's ready to take the reins from veteran Jack Jewsbury.

Share All sharing options for: Continuing the Evolution; Is Alvas Powell Growing into his Spot at Right Back for the Portland Timbers?

19-year-old defender Alvas Powell made his second straight start this past weekend in the Portland Timbers 1-1 draw with visiting Chivas USA. The Jamaican international is the heir-apparent to Jack Jewsbury at the right back spot, but questions remain about the youngster's defending. Should [Club] Captain Jack remain as the first option in that spot, or has the time come to pass the baton to Powell?

Powell saw significant minutes last August when he started in four straight regular-season matches. At the time, head coach Caleb Porter alluded to tactical considerations for starting Powell in at least some of those matches. But it was also widely assumed that the gaffer wanted to get a look at the on-loan prodigy to see if he was ready for bigger minutes—and maybe a contract.

The contract has yet to come, but Porter is still using Powell in tactical situations as well as getting a look to see if he's ready for a more significant role. "It's a little of both," Porter said following the team's training session on Tuesday. "Every move you make is tactical—so a bit of that plays into it—but also, he's a good young player and he's done well in training so I wanted to give him the chance."

With this most recent chance Powell has impressed in some areas, and been disappointing in others. He's got plenty of speed and athleticism that allows him to get forward quickly, and often, to help in the attack. But he's rarely effective once he gets there, sending in poor crosses or not putting the needed finishing touch on a shot or dangerous pass. Jewsbury can't get up the field as often or as quickly, but he can generally be counted on for quality service into the box, or at the very least, to retain possession.

There are stark differences between the two on the defensive side of the ball as well. While Jewsbury is vulnerable when isolated 1v1 against quick wingers, he's got a lot of experience that he uses quite well to position himself. Powell, on the other hand, isn't worried about 1v1 situations as he can make up for just about any mistake with his individual speed. But his positioning and awareness leave something to be desired. "Obviously he wasn't perfect," Porter said when asked about Powell's latest performance. "He got beat a few times, but that's part of the evolution of a young player."

Two of the times Powell got beat were particularly disconcerting, one instance leading to a chance on goal for Chivas (narrowly cleared away by Pa Kah), the other resulting in the visitor's equalizing goal.

In the 56th minute, Powell closes down Leandro Barrera (perhaps lazily, but Barrera has space and Powell is probably protecting against getting beat on the dribble down the sideline) and the Chivas winger plays the ball forward. 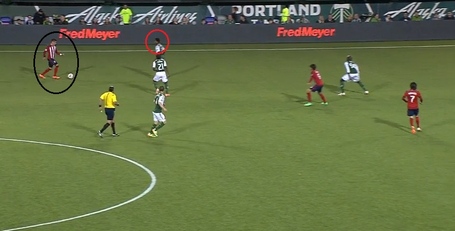 The ball goes into Mauro Rosales... and Powell watches the ball the whole way.

Barrera makes his run and Powell is left watching from behind.

This time around, Kah was wise to the threat and knicked the ball out of bounds before Rosales could redirect Barrera's cross into the net. Unfortunately, Kah didn't make a similar play the next time Powell got beat in behind and Cubo Torres was gifted the equalizer.

As the Timbers continue their quest for the first win of the season, this time in Utah, one of the interesting story lines will be whether Porter allows the evolution of the young Powell to continue, or if he reinstates the elder statesman Jewsbury.