The Timbers have had a revolving door of strikers over the years and it looks like the trend may continue for the foreseeable future.

Okay, let's not get all crazy here and think that there are one or two magical solutions that will suddenly "fix" the Portland Timbers. But this week's announcement that Portland is bringing in on-loan striker Fanendo Adi certainly lends credence to the idea that Maxi Urruti and Gaston Fernandez may not be fitting quite as well as Porter seemed to think they would last off-season.

Many of you have probably been reacquainted recently with this Porter quote:

"I don't think you need to play with a big number nine. I think there's a myth that in the number nine it has to be a big, tall guy. That's old school. If you look nowadays, guys like Suarez, he's not big but he plays the number nine. If you look even in MLS, guys like Di Vaio, guys like Camilo, they're small guys but they do it through being technical, being smart, good movement. My prototypical number nine isn't a big, tall, slow guy. It doesn't work for us because we need a guy who is mobile, who can press, a guy that's active and can stretch. I don't think size plays into it for me too much."

In essence, I agree with Porter. But what you tend to get with guys who are "technical," "smart," and have "good movement," are guys who don't generally do "dirty work." And for forwards, that includes making those bleep-ing runs to the corner flags, chasing down long balls that can stretch defenses and pull center backs out wide, and holding play up to allow time for others to come and get involved. Now, Urruti does do some dirty work (pressuring defenders), but he isn't too keen on getting on the end of balls down the line while a big, huge center back kicks and pushes him for 30 yards across the pitch. He tries to stretch defenses, but he does it in the middle of the field. And as we all know, that just results in a bunch of offside calls.

As for Fernandez, he's mobile, but he definitely doesn't stretch defenses. Here's a sequence from last weekend's 1-1 draw with LA:

Steve Zakuani is off to the races down the left sideline with Fernandez in the middle of the field.

Unfortunately, NBC's TV producer elects to cut to a close-up shot of Zakuani and we miss seeing Fernandez' movement, but what we do get is a clear look of frustration on Zakuani's face as he waves at Fernandez, urging him to continue his run toward the endline/corner. 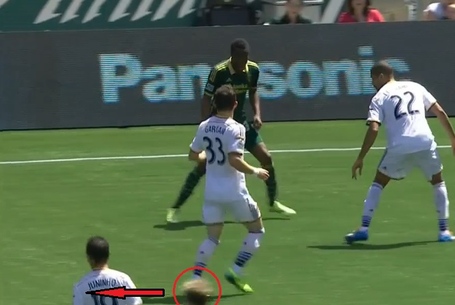 Fernandez does not comply, and instead (as many "crafty" players like to do) he tries to pull a Top Gun maneuver, putting on the brakes in the hopes that all the retreating Galaxy players will fly right by. That blonde blur at the bottom of the frame is Fernandez moving back to the left allowing two defenders to key in on Zakuani with no threat of anyone running in behind them. The result is this:

And what we didn't really get to see thanks to the tight camera angle was Diego Valeri streaking downfield in an attempt to get beyond the defense. But because he had to come from such a great distance, Zakuani was forced to play the ball backward and there was no one left to fill the empty space in the middle of the field in time. Had Fernandez made the run forward, not only could Zakuani have played the ball deeper into the attacking third, but a defender would have been forced to follow. That would have taken more time and opened up more space for Valeri/Nagbe/Johnson/Chara to come support and potentially put something together.

Here's another problem with not having a "big, tall guy" as your number nine. Those slow, big target guys that Porter says don't work for him... they usually don't mind banging around with big defenders and holding the ball up (Kenny Cooper was a great example—even though he had a tendency to flop—when he chose to, he could hold off just about anybody and wait for help to come.)

Alvas Powell brings down a bouncing ball and as pressure comes he clips the ball down the line into space.

Fernandez does some "dirty work" and goes to collect. So far, so good. But instead of controlling the ball and buying some time for teammates to come help, he does this:

...a one-touch, back-heel flick into the middle which LA easily take control of. Imagine if a player who wasn't afraid of contact while getting kicked and bumped had tracked this ball down instead. Portland would have possession—and time—to allow others to get involved, make runs, create space, and develop a coordinated attack towards goal.

So while Urruti and Fernandez might possess many of the qualities prized by Caleb Porter, when it comes to the state of the Timbers number nine, I'm not so sure that what Porter wants is what Porter needs.