How different Saturday could have been if Rodney Wallace’s 53’ strike didn’t flash wide.

Traditionally in this space we like to break down what went right or wrong on one of the goals in the previous weekend’s game. But let’s be honest, the five goals scored between Toronto FC and the Portland Timbers on Saturday morning were pretty boring. Sure, Diego Chara’s high press was instrumental on the first goal, and Donovan Ricketts may have set his wall too close to the byline on the second concession, but breakaways and set pieces rarely make for great Stumptown Breakdown fodder.

Also, there’s a new sheriff in town here at Stumptown Breakdown, so this week we take a look at the buildup to Rodney Wallace’s miss in the 53rd minute.

First, let’s take a look back at the MLS MatchCenter video of the goal miss:

The play starts innocuously enough. The Timbers worked an Alvas Powell throw from the right side across the backline before Liam Ridgewell played to Jorge Villafana on the left wing. 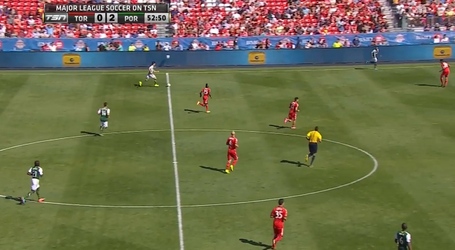 At this point, TFC is in perfectly good shape. Their midfield bank of four is all behind the ball, Dominic Oduro is tracking Villafana, and the Timbers don’t have an obvious overload anywhere. 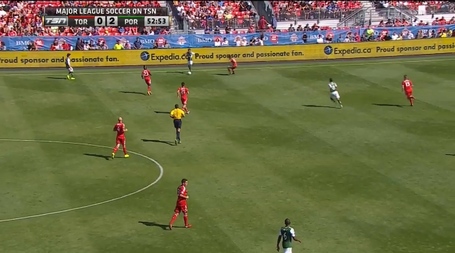 Villafana plays up the line to Rodney Wallace who is under the watchful eye of Mark Bloom. At this point, Diego Valeri starts to check back to provide a third Timber in the buildup, but especially with Steven Caldwell tracking him, TFC is in perfectly good shape to handle it. 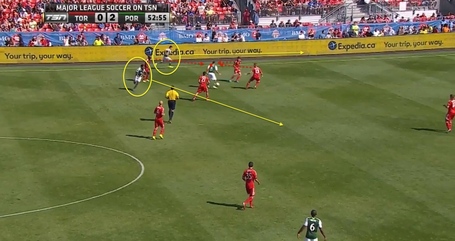 Wallace initially takes a couple touches away from the touchline and attracts some attention before playing to Valeri. And now TFC is making a mess of things. As you can see, Oduro, Jonathan Osorio, Bloom, and Caldwell are all focused on Valeri. Ah, the respect you get for being a maestro. Meanwhile, Villafana is taking off down the touchline while Wallace loops out of the Reds box and runs untracked into midfield. If the Reds had been communicating, Bloom would have rotated to pick up Villafana’s run while Osorio would have tracked Wallace, likely leaving Valeri to harmlessly play back to Ben Zemanski or Diego Chara.  But they didn’t. 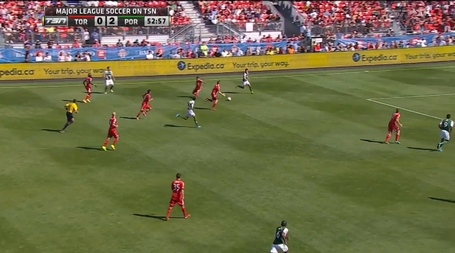 Valeri plays Villafana through with a for-him simple ball. Incredibly, however, all four TFC players are still focused on the ball without paying any mind to Wallace.

Villafana here does something very smart. Rather than immediately look to play to Wallace in midfield, the fullback takes a couple touches toward the byline. This forces the remaining center back - Nick Hagglund - to drop deeper, keeping Fanendo Adi onside, opening the top of the box for Wallace, and pulling Joe Bendik out of goal. In a play full of smart touches, Villafana’s two into the box may be the most impactful. You must also admire TFC’s commitment to completely ignoring Wallace. 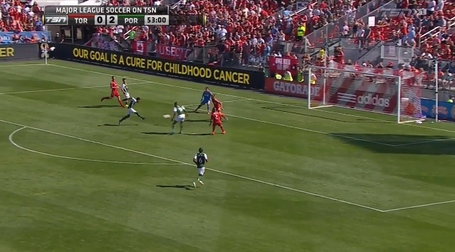 As you can see, the result is that Wallace has the ball in space and an open net with only Hagglund to beat. Crisp touches, a pair of clever runs, and some old fashioned ball-watching have taken the Timbers from being bottled up on the wing to having a sitter ten yards from an open net.