It doesn't take much to make the Timbers defense fall apart.

Facing yet another opportunity to finally jump into a playoff spot, not to mention one final chance to beat the Seattle Sounders this season, the Portland Timbers started attacking early in the match on Sunday, looking for a quick goal. Unfortunately, they were lacking sharpness in their build-up play and early chances went begging.

At the other end, the Sounders were not lacking sharpness. A 14th minute chance by Clint Dempsey came back off the inside of the post, mere inches from putting Seattle on the board.

Then, in the 18th minute, there was this:

The Timbers turn the ball over deep in their attacking half when Diego Valeri tries to center the ball to Will Johnson, but Osvaldo Alonso is more ready for the pass than Johnson is and steps in to take the ball away. Seattle passes it around the midfield looking for a gap. 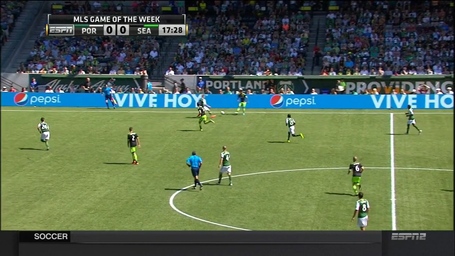 It's Gonzalo Pineda who finds an opening with a pass to DeAndre Yedlin on the sideline. With his first touch, Yedlin slips the ball past Michael Harrington and up the sideline for Brad Evans to run onto. 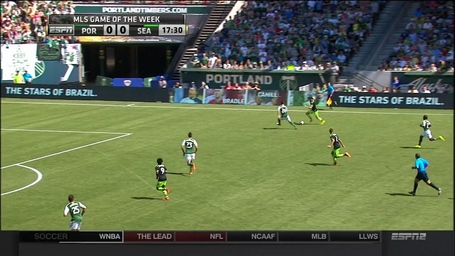 Liam Ridgewell comes out right away and it looks like he's in a really good position to make things difficult for Evans. 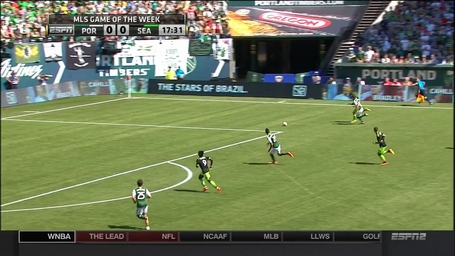 Evans plays the ball way ahead of him and it still looks like everything is going to be fine for the Timbers. Great! 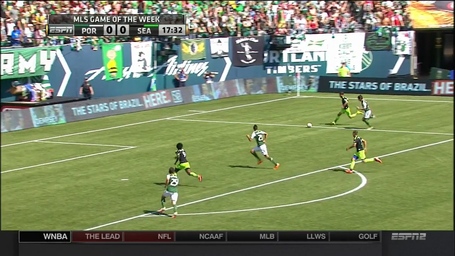 But then Ridgewell gets torched and left for dead. By Brad Evans. He's not even close to being one of Seattle's fastest players, but apparently he doesn't need to be.

In the video, you can watch as Norberto Paparatto realizes that Ridgewell is in trouble and that Evans will get past him. He tries to close the space between him and Obafemi Martins, who never should have been so open while Seattle was trying to break forward, even if it looked relatively unthreatening at first. 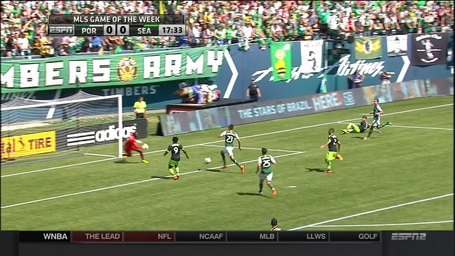 Here's the cross from Evans and it sure looks like Paparatto could get part of his 6'3" frame to that if he would stick out a foot or slide in to block it out for a corner. 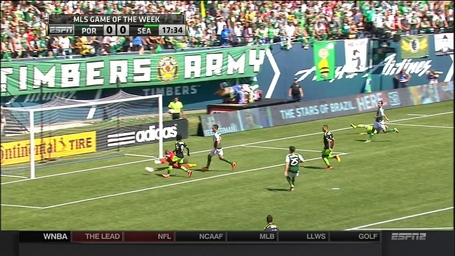 Of course, he doesn't, because if he had I wouldn't be breaking down this particular play. As Donovan Ricketts comes off his line, seemingly undecided about whether he wants to collect the cross or just try to block the shot, it's an easy tap-in for Martins. Seattle get on the board relatively early and they never look back.

If there was a pattern in the four goals the Timbers conceded, it was probably their utter failure to get their bearings when Seattle broke forward with speed. It didn't even take a true counter attack to undo the Timbers in this particular instance; just a quick pass through the midfield did the trick just fine. Even when the Timbers had the numbers back to defend, they struggled to get reorganized, giving Seattle players far too much space. Over and over again, when Seattle came at them quickly, the defense came undone, with no hope of putting themselves back together.

This should be a major concern for the Timbers looking ahead to their match against the Vancouver Whitecaps, who may lack an attacking duo as frightening as Martins and Dempsey, but who have plenty of speed, which they have used to unravel better defenses than Portland's (see: Kansas City, Sporting). In this massively important, six-point game, the Timbers will need to cope with that speed while they find their way past a defense that has actually allowed fewer goals than Seattle has.