One of the most beautiful things about soccer is how different teams at different levels can play the game a myriad of different ways, yet still find success.

Some coaches choose to aggressively press and create chances off of careless giveaways. Others decide to sit back and quickly counter after drawing the opponent out of position. In Coach Cameron Knowles’ system, T2 tends to utilize a mid-block and play more direct. However, to make that system work, they rely on one very crucial position: the outside back.

How T2 employs their fullbacks

The two most common starters at the position for T2 are Nathan Smith, a 24-year-old right back, and Marco Farfan, a 20-year-old left back who is loaned down from the first team. T2 usually runs a 4-2-3-1 with the wingers inverting while the outside backs cover the entirety of the flanks. Both Farfan and Smith rely on their speed to "bomb up the field," playing a part in the attack while also being able to track back and defend.

When the team wins possession, most often in their mid to low block, the ball will start wide with either Farfan or Smith. When the opponent plays more narrow, they can get up the sideline where they then decide to either pass the ball centrally, backward or make a long switch to the opposite winger. More often than not, the decision tends to be the latter one which has often resulted in a loss of possession this season.

As you can see from the graphics below, the average position of Smith and Farfan are often at, or even above, midfield. 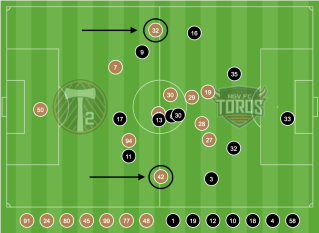 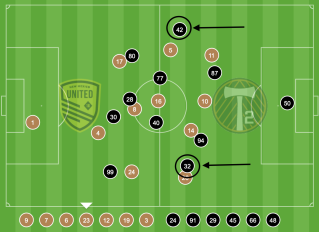 With both Smith and Farfan operating so far up the field, the tradeoff comes when the team turns the ball over and they are caught in transition. Both outside backs have a lot of ground to make up which has resulted in scrambles at the back when they cannot fully recover. T2 gives up 1.7 goals per game (in the bottom third league-wide) and allowing opposing wingers so much space out wide during transition moments has been one of the biggest contributors.

Is the tradeoff worth it?

One of the biggest questions that have to be asked with the outside backs being pushed so high is whether their offensive contributions warrant those rare moments of discombobulation at the back. For example, a player like Marcelo on Real Madrid is so impactful on offense that he contributes more towards his own team’s goals than what they ultimately concede. Obviously, no USL side has a player comparable to Marcelo, but anyone can argue that what Farfan and Smith contribute on offense is not beneficial enough to warrant them being pushed so high up the field.

As you can see from the images below, most of their successful passes come in the middle of the field along the sidelines when they can get the ball to a midfielder. They end up playing the ball backward and to the side a fair amount, and when it comes to maintaining possession and breaking open a defense with that killer ball in the final third, they are just unable to do it. 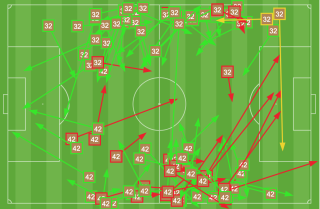 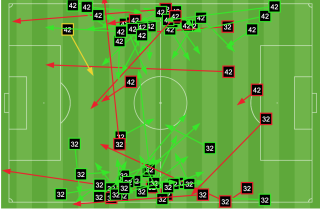 What makes this all very concerning is the reliance that T2 has on their play out wide. Teams who like to play direct--such as T2-- can be easily held in check when defenses force them to play wide and they aren’t able to connect on any balls played into the final third. Strikers such as Foster Langsdorf and even Dairon Asprilla are often rendered moot when they don’t receive any service. So far this season the team has converted 24 out of their 98 attempted crosses with Farfan being five for 18 and Smith three for eight. T2 has been at its best this season when Langsdorf is getting on the end of crosses and putting the ball into the back of the net; a crossing accuracy of 24% will just not cut it.

Despite their struggle to provide service into the box, having players such as Farfan and Smith who are capable of controlling the flanks has been a vital part of T2’s early season success. While the team has already proven capable of effectively playing up the middle with players such as Eryk Williamson and Renzo Zambrano, being able to take advantage of their self-created offensive advantage while minimizing risks in transition will keep T2 near the top of the west by seasons end.

Statistics and images courtesy of USLChampionship.com