For the second time in their past six games, Timbers 2 claimed all three points from a match. And for the first time since early April, they came out on top at home.

Dairon Asprilla and Modou Jadama would both find the back of the net for T2 in the second half after conceding early as T2 defeated the Real Monarchs 2-1 at Providence Park on Wednesday night.

You can find the official post-game recap here

Despite the Monarchs initial pressure to start the game, T2 looked to be knocking on the door the entirety of the first half. However, they couldn’t quite find that final ball in front of goal and paid the price.

In the 37th minute, Martinez played a give-and-go with midfielder Mastanabal Kacher in the box who laid the ball back off for a great curling shot that was perfectly placed into the top right corner of the net. It was a tough angle but was hit so cleanly that keeper Kendall McIntosh had no chance. 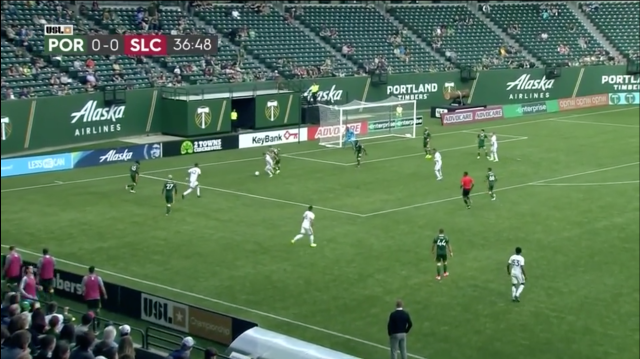 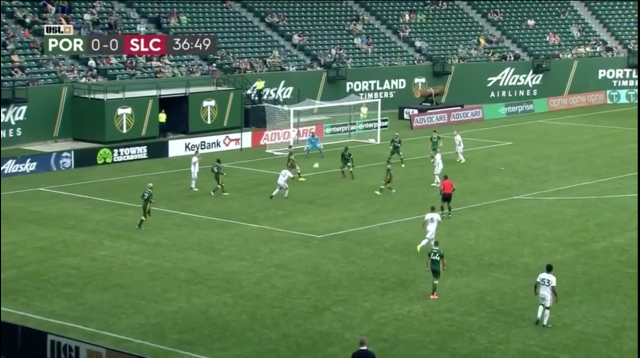 T2’s leading talisman found the back of the net again.

For the third week in a row, Asprilla found a way to score the goal, but unlike his other two goals in the span, this goal came from open play.

It was a crazy sequence that saw the ball served into the box, headed into the air, and launched into the right post before Asprilla found the ball at his feet and fired it in through traffic. While this might not have been the most flashy goal of the game, it might have been the prettiest; at least, it started that way.

After receiving the ball from center back Roy Miller, Marco Farfan played a give-and-go with Asprilla who played a beautiful ball back down the left flank for a sprinting Farfan who was in behind the Monarch’s back line. The young outside back was able to provide service into the box which was headed into the air by Ryan Sierakowski and fired into the post by Marvin Loria. After finishing off the play, Asprilla celebrated the vital equalizer--and his team-leading sixth goal of the season--by running to the corner and doing a backflip before play continued. 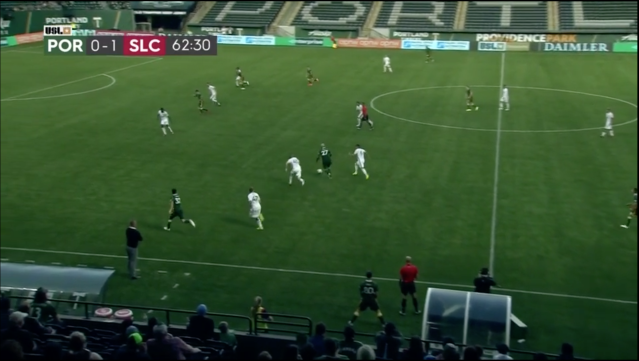 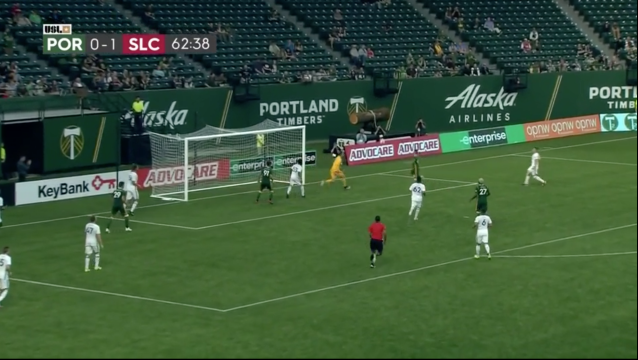 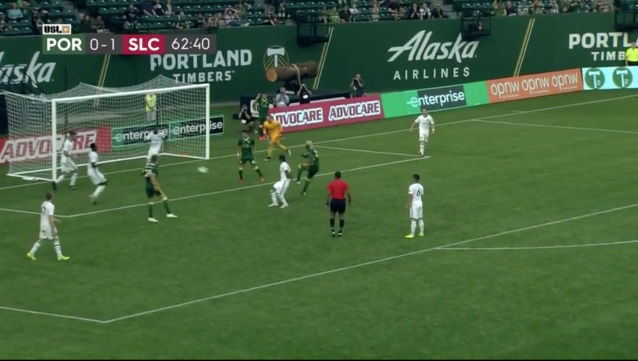 After T2’s equalizer, the game started to get a little more chippy. Just a few minutes earlier, a Monarch player earned a yellow card by booting a ball at the ad boards after voicing his displeasure towards the referee. Now after enough bodies hit the pitch, T2 was awarded a free kick in a dangerous position. Before the ball was placed, another Monarch took the ball and threw it to the ground hard in disgust.

Up to the ball stepped both Loria and Jadama. Most of the stadium, including the Monarch keeper, must have expected the kick to either be taken directly or swung in by Loria. However, it was the center back who stepped up and sent a strong, perfectly placed ball into the very top left corner of the net in a place where no keeper could reach.

The goal turned out to be the winner for T2 and was Jadama’s fourth of the season. 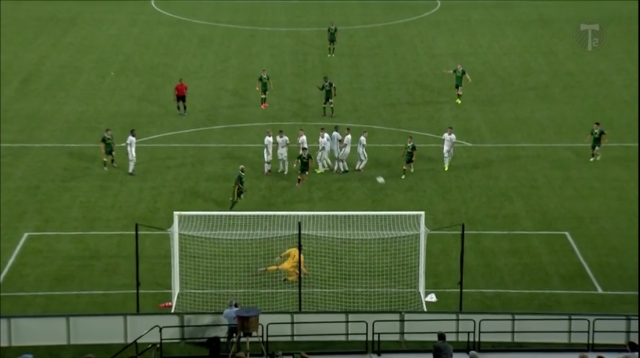 Throughout the season, T2 coach Cameron Knowles has done a good job of making sure that his team can adapt to many different playing styles. Last week they took on El Paso Locomotive who like to play with more of the ball while on Wednesday night they played a Monarch team that was content with allowing T2 to have possession. Last weekend the team adapted by utilizing a high press and forcing the Locomotive to be uncomfortable in possession. Despite having just around 25% of the ball, T2 was able to force a draw and provide many decent opportunities for themselves. On Wednesday night, they managed to have 56.6% of possession and outshot the Monarchs 18 to 10.

Look at this passing map below. 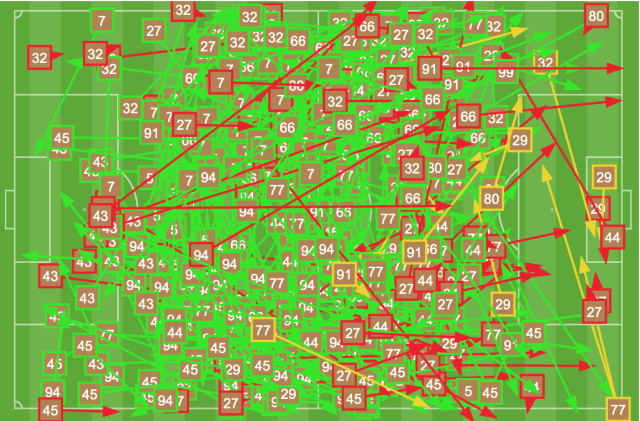 This is the type of passing map of a dominant team. They passed the ball 117 more times than the Monarchs and were able to work themselves into opportunities the tested their opponent’s back line time and time again. 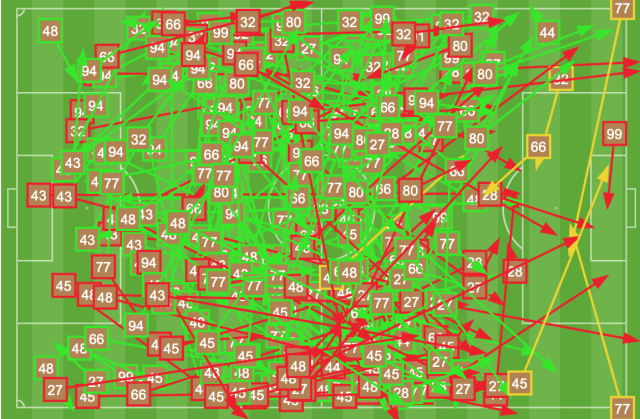 The map above is the one from Saturday’s game against El Paso. As you can see here, there are less threatening chances in and around the box. They nearly passed the ball 300 times less than the Locomotives, but it didn’t matter as they fought their way to a one-all result.

Whether it’s playing with or without the ball, the team has done a good job over recent weeks of showcasing their tactical flexibility while adjusting to the opponent enough to get results.

Asprilla is too good for this level

At this point, it seems like Asprilla is in a state of limbo. He looks a cut above any of his opponents at the USL level, yet it will be hard for him to find his way onto the field for the first team.

Against the Monarchs, he looked flat out dominant. Early on, he stole the ball on the right-hand side of the field and beat his defenders to the touch line before playing a simple cross. That would be the case for most of the night as he was continuously fouled and found himself in the middle of a handful of T2 opportunities. He was eventually rewarded with a goal in the second half and for now, has to be considered a staple in Knowles starting eleven week in and week out.

Here is his map from Wednesday night’s game: 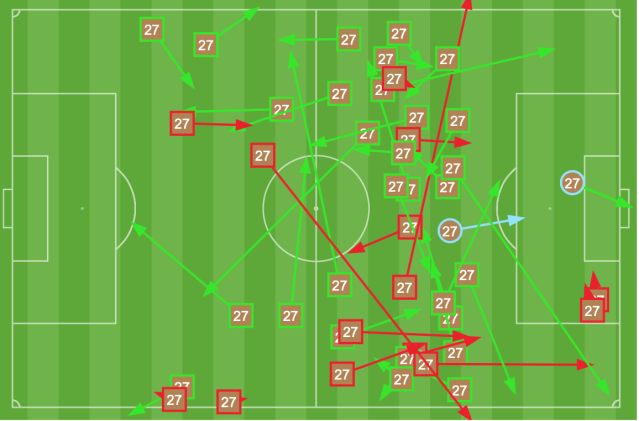 He did a good job on the night of linking up various parts of the field while providing a threat to the entire Monarch back line throughout the night.

Right now he is behind Brian Fernandez, Sebastian Blanco, Diego Valeri, and Jeremy Ebobisse on the attacking depth chart for the first team. That does not even include the likes of a player like Melano. It will always be tough for Asprilla to get time at the MLS level and as much as he shows out in the USL, it doesn’t mean anything until he can prove himself as a constant threat in MLS.

The center backs stepped up 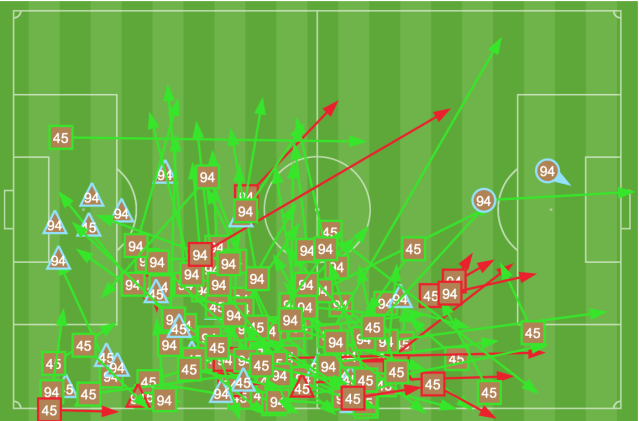 Look at this map. For two center backs, this is a remarkable looking map which shows how accurate they were Wednesday night at both their distribution and attacking.

Multiple times throughout the night, Hanson was making runs with the ball from the back to the front which helped T2 gain an attacking advantage in the final third. In the defensive third, they were dominant as well. Both Jadama and Hanson were a big factor in winning the ball back and turning defense into offense.

Late in the second half, Jadama was rewarded for his tenacity and play with the winner, but both center back’s stability and decision making on the ball made a huge impact on the result and helped propel T2 to the important home victory.

Wednesday nights win helped temporarily propel T2 to second in the west with 22 points. A result in their second game at Providence Park was important because it helped boost the team’s confidence and standing in the table. They got the job done at home; now they will need to turn this win into momentum on the road.

Next up T2 will travel to Austin to take on the Bold at 5:30 on June 8 before returning home to Providence Park to take on Fresno FC on June 16.